MARION FELDMAN is recognized as one of today’s leading performers and pedagogues of cello and chamber music. She is a member of the artist faculty at New York University, Steinhardt School Department of Music and Performing Arts Professions, where she teaches cello and chamber music. Along with this, she has been on the cello and chamber music faculty of Manhattan School of Music, College and Preparatory Divisions, since 1974 and the CUNY Brooklyn College Conservatory of Music since 1972. She also is a member of the faculty at the City University Graduate Center. Miss Feldman received her training as a scholarship student at The Juilliard School, where she studied with her mentor, Luigi Silva. Additional studies were with Leonard Rose, Bernard Greenhouse, and Zara Nelsova. Chamber music tutelage was with the members of the Juilliard String Quartet,William Primrose, Artur Balsam, Louis Persinger, and Hans Letz. Later, she attended the Accademia Chigiana in Siena, ltaly, for summer courses with Andre Navarra. Following this, she coached with Marion Davies, a student of the famous Emanuel Feuermann, gaining musical and technical insight into his highly regarded approach to music-making and cello playing. Miss Feldman has appeared extensively throughout the United States and the Far East as orchestral soloist, recitalist, and chamber musician. Included among her many engagements have been numerous recitals at Carnegie Recital Hall(Weill), Tully Hall( Lincoln Center), and Merkin Hall in New York City. She been invited to many festivals in the Far East, among them those in Taiwan, Korea, and Mainland China. In 1992 and in 2001, she participated in government- sponsored tours of Taiwan. In addition to this, in 2001 she appeared in concert in Taipei giving master classes sponsored by the Quanta Education Foundation and the Taipei American School. This led to a collaboration for concerts at the National Concert Hall in Taipei, and master classes with members of the Ars Trio Taipei. From 1993 to the present, she has appeared at many festivals in Korea. These include the Seoul Music Festival, Cheju-Halla Festival, and the Kangneung -Manhattan Festival. She was invited to be a visiting professor for the spring festival at the Soong-Sil University in Seoul, where she gave a series of master classes. During the last three summers she has taught and performed at the Dae-Jin University Festival in Seoul, Korea. Ms. Feldman was invited by the government of Mainland China to give master classes and a recital at the Shanghai Conservatory and the Central Conservatory in Beijing. Marion Feldman is presently a member of the chamber group Metamorphosis, a piano quartet that is comprised of NYU faculty members. She was for ten years a member of the New York Lyric Arts Trio. The group not only toured the United States but also founded the Downeast Chamber Music Center in Castine, Maine. The Center ran both a summer school and a chamber series which featured the trio. Later, she joined the New Manhattan Trio with the late Erick Friedman, violinist, and Joseph Seiger, pianist. She has also been a member of the Lorenzo Trio and the Aureus Ensemble. “She cultivates an unusually large, resonant tone, and relies on a bowing technique that is constantly secure and poised.” New York Times “The Shostakovich Sonata, which covers an especially wide range of musical gestures, was particularly well realized with all of its diversity of expression carefully considered and convincingly unified. Miss Feldman caught the tender. capricious nature of the Beethoven most effectively, while the Chopin Sonata was phrased with real aristocratic elegance.” New York Times “Ms. Feldman is a strong and solid musician . . . a cellist of supreme accomplishment. She is an artist of the first water, a warm communicative musician, a master of her instrument and a seasoned veteran of the concert stage. These are all qualities she holds in abundance.”

Manhattan School of Music faculty since 1982 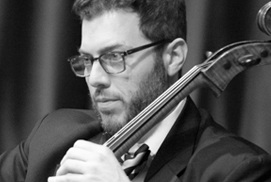 A Native of Spanish Harlem in New York City, cellist NICHOLAS TZAVARAS has quickly become a much sought after chamber musician, soloist and educator across all continents. Reviews in the New York Times have called his playing “richly singing” and “beautifully nuanced.” Since 2000, Mr. Tzavaras has been the cellist of the internationally renowned Shanghai Quartet, playing more than 1300 concerts all over the world.

Mr. Tzavaras has recorded more than 20 albums for the Naxos, Delos, Bis, Centaur, Camerata, and New Albion labels. Recent festival engagements have included the Santa Fe, La Jolla and Taos festivals, the Casals festival in Prades France, the Melbourne Music Festival in Australia and the Marlboro Festival. Since 2009 Mr. Tzavaras has held the esteemed title of guest principal cellist of the Shanghai Symphony Orchestra.

Formerly on the faculty of the University of Richmond, Mr. Tzavaras is currently the coordinator of the String Department and artist in residence at the John J. Cali School of Music at Montclair State University in New Jersey. He is also a guest professor at the Shanghai and Central Conservatories in China. He holds degrees from the New England Conservatory and the State University of New York at Stonybrook where his teachers included Laurence Lesser and Timothy Eddy. Mr. Tzavaras can be seen in the Academy Award nominated documentary “Small Wonders,” the motion picture “Music of the Heart” starring Meryl Streep and with the Shanghai Quartet in Woody Allen’s “Melinda Melinda.”

When he is not with his cello, Mr. Tzavaras is an avid cyclist, occasional triathlete, enthusiastic but unfortunately average chess player and, perhaps most importantly, a challenged father of three children all under the age of seven.

Cellist, JIAZE (JIAHUA) MA was born in a musical family in China. He started to study the piano with his mother at age of 4, and began to study the cello with his father at age of 11. In 2001, serving as the principal cellist of Shenzhen Experimental School Symphony Orchestra, Ma toured with the orchestra to France, Italy, Austria, Macao and Taiwan. Later on, he went to Shenzhen Arts School, studied the cello with Yihao Zhang, Artem Konstantinov and Dong Chao.

After coming to the United States, being awarded Edmund Builkolt String Scholarship and Francescbi-Stoll Scholarship, Ma studied with Lawrence Leviton and cellist Cheng-Hou Lee, and earned his Bachelor of Music degree at University of Wisconsin and Northern Illinois University, and achieved Academic Excellence award every year. In 2011, Ma’s quartet was named the Honor String Quartet during his time at Northern Illinois University School of Music. Among many of his performances, he annually held recitals in Shenzhen, China and received great reviews. Ma also performed with the Silk Road ensemble at University of Wisconsin in 2012. Ma earned his Master of Music degree in cello performance under Belgian cellist Thomas Landschoot at Arizona State University School of Music where he was also awarded special talent scholarship. Currently, Ma is pursuing the Doctor of Musical Arts degree in cello performance under the guidance of world- renowned cellist Yehuda Hanani at College-Conservatory of Music in Cincinnati.

Since arriving in the United States in 1987, Chinese-born QIANG TU has established himself as a multifaceted artist much in demand. He won the San Angelo, Texas, Symphony Young Artist Competition in 1987, and the Grand Prize in the Downey Symphony Young Artist Competition of Los Angeles the following year. In 1994, he served as Principal Cellist of the Princeton Chamber Symphony. Mr. Tu joined the New York Philharmonic in November 1995. After making his solo debut at age 13 in Beijing, Mr. Tu began a two- year engagement as soloist with one of China’s major symphony orchestras. At age 17, he was awarded England’s Menuhin Prize as a member of the China Youth String Quartet, and was later selected by the Chinese government to study in the Sydney Conservatory. In that capacity, he toured the country giving chamber-music and solo recitals, including a concert broadcast live from the Sydney Opera House. The culmination of his Australian tenure came when he won Sydney’s Parlings Award for Music. Returning to Beijing, he was appointed, at age 20, Associate Professor of Cello at the Central Conservatory. Concurrently, he became Principal Cellist of the China Youth Symphony and concertized with the orchestra in Switzerland, West Germany, France, Belgium, Italy, and Great Britain. His solo album, Meditation, was distributed by the China Record Company.

In the United States, Mr. Tu has appeared in Chicago, St. Louis, New York, and other major cities. Early on, he gave a solo recital to benefit the Princeton Chamber Symphony and also performed the Dvořák Cello Concerto with the Greater Princeton Symphony. Additional performances included the Elgar and Walton cello concertos with the Princeton Chamber Symphony. He also performed in recital with pianist Helen Huang to benefit the New Jersey Chinese community.

Mr. Tu’s appearances also include six recitals in Taiwan, including one at the National Concert Hall in Taipei, in addition to recitals in Japan, Hawaii, and at Weill Recital Hall in New York. His extensive chamber music appearances have included performances with the group, Elysium, at Weill Recital Hall; in Hawaii; and at the Hellenic-American Cultural Association of Colorado. He has performed at chamber music festivals in Maine, played cello works and chamber music in Korea, and has appeared with Lukas Foss in chamber works at Weill Recital Hall and at the Stephanie H. Weill Center for the Performing Arts in Wisconsin. Mr. Tu has performed on a live broadcast on WNYC, and appears frequently with the New York Philharmonic Ensembles chamber music series at Merkin Concert Hall.

Mr. Tu earned his bachelor of arts from China’s Central Conservatory. In 1990, he received his master’s degree from Rutgers University, where he studied with Bernard Greenhouse. He is an alumnus of the Music Academy of the West, now a partner in the New York Philharmonic Global Academy. Other past teachers include Zara Nelsova, Geoffrey Rutkowski, Lois Simpson, Paul Tortelier, and Zeguang Tu.